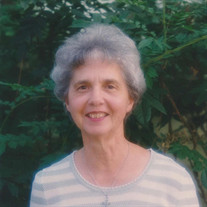 Florence Margaret Smith Pindar, 97, of Albany died December 24, 2020. A Memorial Service will be held in Albany, Georgia at Covenant Presbyterian Church at 11:00 A.M., Monday, April 12, 2021, visitation at 10:00 A.M in the Covenant Parlor. The Rev. Dr. William D. Coker will officiate. The service will be streamed on Facebook Live at www.facebook.com/covpresbythelake A native of Atlanta, the youngest of seven children of Clyde and Catherine (Hecker) Smith, Florence moved with her family to Albany as a child, and graduated from Albany High School, Class of 1942. She joined the U.S. Cadet Nurse Corp in 1943. She received an RN degree from the St. Vincent’s Hospital School of Nursing in Jacksonville, Florida in 1945. Then she served at Kennedy General Hospital, Memphis, Tennessee, the largest Army Hospital in the nation, which treated thousands of severely wounded and injured World War II soldiers. After the war, she returned to Albany and worked as a nurse at Phoebe Putney Hospital. In 1948 Florence married Robert E. Pindar who had a long career as a Federal Civil Service procurement officer. After children Bob and Mary Carolyn were born, she nursed and cared for family, friends, neighbors, their children and pets. Florence was a long term Red Cross volunteer. For more than a decade, she volunteered at Dougherty County Youth Detention Center as a craft teacher. She served on Habitat for Humanity's Board of Director’s selection committee, and grew many plants used to landscape Habitat homes. Florence was one of the last living charter members of Covenant Presbyterian Church, where she was active in numerous ministries and community outreach. She was one of the first women to serve as a deacon and as an elder. An avid gardener, she was a member of the Albany Garden Club and there was always something beautiful blooming in her garden. She loved the beach and no one enjoyed a yard sale or estate sale more than Florence. She was preceded in death by her husband, Robert E. Pindar, Sr., originally of Valdosta. Survivors include son, Bob Pindar, of Albany; daughter Mary Carolyn Pindar (and husband Rev. Tom H. Johnson, Jr.) of Pine Mountain; nieces and nephews Pat Dugan, Jane Smith Crowley, Susan Smith, Paula McDaniel and Thomas Mock. In lieu of flowers, memorial donations can be made to Covenant Presbyterian Church or Flint River Habitat for Humanity.

The family of Mrs. Florence Pindar created this Life Tributes page to make it easy to share your memories.

Send flowers to the Pindar family.