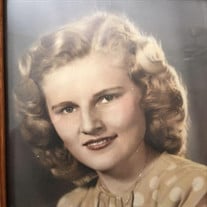 Evelyn Shirley Tesar was born on October 3, 1928 in Prairie du Chien, Wisconsin, to parents, Charles Tesar and Margaret (nee Karnopp). Evelyn passed away on May 11, 2020 at Wynfield Park Health & Rehabilitation in Albany, Georgia. Evelyn was preceded in death by her parents and four younger brothers: Kenneth, Lawrence, Clifford and Harvey. She was also preceded in death by her first spouse and father of her 3 children, James A. Schroeder, as well as her middle son, Jeffrey L. Schroeder, and second spouse Jack Hinderleider. She is survived by her two sons, Kenneth Daniel Schroeder and Richard James Schroeder, and many grandchildren and great-grandchildren. Evelyn was born during the Great Depression. Growing up during this time on a small farm in rural Wisconsin formed the quality and character of who she was throughout her life. Being the first born with four younger brothers, Evelyn (“Tootsie” to her family/friends) learned the true value of hard work, perseverance, helping your neighbor and most of all, her lifelong love of all animals. She knew what it took to raise and nurture every kind of animal. She carried this throughout her life. In her later years, she would share part of her evening meal with the neighborhood cats, dogs and birds. She loved movies, pictures and stories about animals. Evelyn graduated in the top 10 of her high school class at a time when that was a rare feat - especially growing up on a farm. She was unable to participate in any after-school sports or other activities, as she had to be home to milk cows and do chores with her father, and later her younger brothers. After graduating from high school, she went to work at a bank in Prairie du Chien where she met her two lifelong friends, Dave and Rose Ann Krieg. She also worked part-time at the local movie theater where she met another lifelong friend, Annie Weldy. In her mid-20s, she and three other young women moved from the small rural town in Wisconsin to the big city of Chicago. Again, something most young women did not do in the early 1950s. She worked for a major insurance company, Marsh McLennan and stayed in Chicago until meeting James A. Schroeder and moving to the Madison, WI area. Upon returning to Wisconsin, she raised her three children all while working in the banking industry. She worked for over 20 years at the First Wisconsin Bank in Waunakee, where she met another lifelong friend, Dorothy Fangmeyer. A promotion by her husband took her family to Oconomowoc, where she worked the night shift in admissions at the hospital. Following a divorce, she remarried which took her to Albany, Georgia. In Albany, Georgia, Evelyn went to work for the Law Firm of Hodges, Erwin, Hedrick, & Gray, as their bookkeeper, until retiring at age 74. Her math, accounting and bookkeeping skills were unquestioned. Throughout her careers her keen eye found mistakes in financial records of CPAs whom had twice the education level. In her retirement years, Evelyn enjoyed traveling the U.S. to visit her sons and their families, her brothers and lifelong friends to spend precious time with those she loved. She was also blessed to be able to make two trips to Germany to visit friends who had moved there from Albany, Georgia, to Germany. As a mother, Evelyn taught her sons what she had learned growing up: that hard work, honesty, remembering your parents’ struggles, helping others and not being wasteful were the traits that they needed to carry forward in their lives. She was a self-described “stubborn German- Bohemian with a little Gypsy”- all of which she was very proud of. Early on she taught her sons how to cook, sew, do laundry, as well as how to balance a check book and establish credit with a bank. Evelyn was always very involved in her Lutheran churches. She was on various committees, served for years as the church bookkeeper, and even went on Saturday afternoons to set up the coffee and other snacks to be ready for church services on Sunday morning. She was very active in bake sales, potluck suppers and other church events. Evelyn chose small churches for their close-knit communities. Evelyn never forgot her roots or where and how she was raised. She was forever a farm girl, earnest and hard working. Throughout her life she continued to do “chores” outside (even in the sweltering South Georgia heat): mowing the lawn, raking daily, or even cutting down a tree! Evelyn was able to stay in her home in her later years with immeasurable support from her sons, her dear friend and neighborBetty Archer, the young ladies who stopped by to check in on her with their children, and Babs and Spence who brought over home cooked meals. In honor of Evelyn’s lifelong love of animals, memorials may be sent to the Humane Society or your local animal shelter.

The family of Mrs. Evelyn Tesar Hinderleider created this Life Tributes page to make it easy to share your memories.

Send flowers to the Hinderleider family.