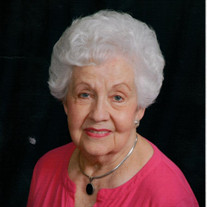 Mrs. Evelyn Butler Clifton passed away peacefully at The Phoenix at Albany on Thursday, December 2, 2021. A service of remembrance will be held on Monday, December 6 at 11:00 a.m. at First United Methodist Church of Albany with Reverend Jim Morrow officiating. Visitation will be one hour prior to the service in the church sanctuary. Interment will follow at Crown Hill Cemetery. A native Albanian, Evelyn was born on November 18, 1932, in the house on Flint Avenue where her father was raised. She was preceded in death by her husband of 60 years, Charles Lamar Clifton, Sr., her parents, Mary Powell Butler and Hooks Newton Butler, and an infant sibling, James Harvey Butler. Survivors include her children, Dr. Charles Lamar “Chip” Clifton, Jr (Bonnie) of Amelia Island, FL; Cary Clifton Stoudenmire (Phillip) of Albany; and Dodwell Butler Clifton (Mary Beth Skandalakis) of LaGrange, GA. Grandchildren: Dr. Charles Jacob “Charlie” Stoudenmire (Laura Leigh) and John Butler Stoudenmire of Albany; Charles Lamar “Clay” Clifton, III of Atlanta, and William Ferrell “Will” Clifton of New York, NY. Great-grandchildren: Avery and Margaret Stoudenmire of Albany. Mrs. Clifton was an honor graduate of Albany High School, Class of 1950. After receiving two academic scholarships, she received her Associate of Arts Degree from Mercer University where she was a member of Alpha Delta Pi Sorority. She then received a business degree from Morton Business College, with additional courses at the University of Florida and Darton College. She took tax training courses for 22 years with certificates from the Internal Revenue Service and the Georgia Society of Certified Public Accountants. Through the years, Evelyn had a variety of careers. Civil Service jobs included Turner Air Force Base, U.S. Department of Agriculture (ASCS), Safety Officer’s Secretary at Marine Corps Supply Center, and Taxpayer Service Representative at IRS. At the University of Florida, she was secretary to the Head Football Coach and Athletic Director, Coach Bob Woodruff. She was a “stay at home mom” when her children were young, returning to the workplace with the Georgia Heart Association as they went off to college. Finally, she was a Tax Assistant at Draffin and Tucker, CPAs for 18 years. Throughout the years, she was always at her husband’s side during his years of Chamber of Commerce work and community service. During their 12 years in Columbia, SC, Evelyn and Lamar were members of Kilbourne Park Baptist Church, where she was an active member and Bible leader of the WMU, a Sunday School teacher in several departments, Brownie and Girl Scout leader, as well as Board Member of the Congaree Area Girl Scout Council, and a Division Co-Chairman of United Way of Richland County, SC. Moving back home to Albany in 1970, she returned to First United Methodist Church where she and Lamar were married in 1953. At FUMC, she was a member of the Fellowship Sunday School Class, UMW member, and served on the Administrative Council, the Hospitality Committee, the Grief Group, and various other committees. Bible studies were a favorite activity. Evelyn was a member of the Charity League of Albany, during which time she served as a Pink Lady, Debutante Advisor, League Letter Editor, created a Mini Museum at Phoebe Putney Memorial Hospital, and co-wrote the “History of the Charity League” for its 50th anniversary. While serving on the Board of the Thronateeska Heritage Museum and as its membership chairman, the museum relocated from the historic Smith House to the old railroad depot. During this time, Evelyn researched and co-authored the historical brochure, “Shades of Albany.” At Phoebe Putney Hospital, she served on the steering committee for the publication of “A History from the Heart,” the history of Phoebe and the medical community. She loved her twice a week YMCA exercise group and her many friends. For many years, Evelyn shared the hobby of genealogical research with her mother. They traveled extensively, and she authored three family history books. She was a member of several county regional, and state genealogy societies. She served as a Registrar and Regent of Thronateeska Chapter of the Daughters of the American Revolution for which she co-wrote and published the book “Revolutionary Ancestors of Thronateeska Chapter, NSDAR Members – Past and Present” to commemorate the 100th anniversary of the chapter’s founding. She was also a member of the Albany Town Committee of the National Society of the Colonial Dames of America in the State of Georgia, the Pilgrim Edward Doty Society, and the Mayflower Society. Despite these many activities, Evelyn’s priorities were always family, church, and home. She and Lamar enjoyed grandparenting, gardening, and traveling with family and friends. The family would like to thank the staff of The Phoenix at Albany and Evelyn’s special caregiver, Kwajalein Guest, for all of their care and compassion. Memorials may be made to First United Methodist Church Albany, 307 Flint Avenue, Albany, GA, 31701 (www.firstmethodistalbany.com) or to a favorite charity.

Mrs. Evelyn Butler Clifton passed away peacefully at The Phoenix at Albany on Thursday, December 2, 2021. A service of remembrance will be held on Monday, December 6 at 11:00 a.m. at First United Methodist Church of Albany with Reverend Jim... View Obituary & Service Information

The family of Evelyn Butler Clifton created this Life Tributes page to make it easy to share your memories.

Mrs. Evelyn Butler Clifton passed away peacefully at The Phoenix...

Send flowers to the Clifton family.