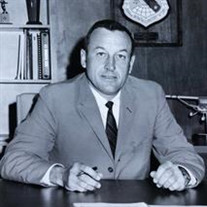 CLARK, Eugene Raine, Jr. – The family of Eugene R. Clark, Jr. mourns the death of our much beloved father, brother, grandfather, and great-grandfather on May 30 at the age of 94. An Albany native, Genie was born on November 5, 1925 to Eugene R. Clark, Sr. and Eileen Hope Clark. He grew up with a large extended family and many friends who provided him with deep ties to this area for which he held an abiding love all his life. After graduating Albany High School, he attended the Citadel in Charleston for one year, but as soon as he could legally do so, he enlisted in the Army to fight in the final year of World War II. At the young age of 18, he was assigned to the 330th bomber group as a top gunner on a B-29 where he completed over 16 missions in the Pacific. Sustained by his sense of duty and love of country, he was a prime example of “the greatest generation.” Returning home after the war, he enrolled at Georgia Tech where he graduated from the school of industrial engineering. Shortly afterward he married his adored high school sweetheart, Rosalie Brown, with whom he made a happy home until her passing in 2003. In 1950 he joined the F.B.I. and was posted first to Philadelphia, then to New York City. But Genie and Rosalie felt the pull of home and in 1956 returned to Albany, where he established Clark Brothers Warehouses, along with his late older brother, Chet, and his younger brother Jesse. Genie worked hard to create a successful business, simultaneously developing a reputation for honesty and integrity while becoming a community leader as a member of the city’s Water, Light, and Gas Commission, a board member of the First State Bank, and an active member of St. Paul’s Episcopal Church and the Kiwanis Club. In 1970 he was elected Mayor of Albany to fill out the term of deceased mayor Motie Wiggins, and then re-elected for a full term until 1973. Despite the urgings of colleagues, he did not want to pursue a political career, and returned to the business world. He is survived by his daughter Lisa and son-in-law Walter W. Kelley, Sr. of Albany, his son Peter and son-in-law Jonathan Rosenbloom of New York, his brother Jesse of Land of Lakes, Fla., his grandchildren Kathleen and her husband Marbury McCullough, and Walter W. Kelley, Jr. and his wife Maggie, both of Birmingham, Ala., and four great-grandchildren, William and Caroline McCullough, and Clark and Rosie Kelley. The legacy Genie leaves is one of patriotism, civic pride, devotion to family and friends, belief in justice and fairness, and gratitude and humility for the bounteous blessings of our lives. We are profoundly thankful to have had Genie with us for so long, and we are immensely proud of the example he set for us and for succeeding generations. He lives on in our hearts, minds, and spirits. The family also wishes to express our profound thanks to the devoted caregivers, Ozzie Armstrong, Margaret Bobb, Ann Gulley, and Gloria Seay, whose professionalism and personal warmth made the last months of his life as comfortable as possible. The family will be having a private burial with a memorial service held at later date. You may sign our online guestbook and share your own special thoughts with the family of Mr. Clark by visiting Kimbrell-Stern’s website at www.kimbrellstern.com.

CLARK, Eugene Raine, Jr. &#8211; The family of Eugene R. Clark, Jr. mourns the death of our much beloved father, brother, grandfather, and great-grandfather on May 30 at the age of 94. An Albany native, Genie was born on November 5, 1925 to... View Obituary & Service Information

The family of Mr. Eugene Raine Clark Jr. created this Life Tributes page to make it easy to share your memories.

Send flowers to the Clark family.