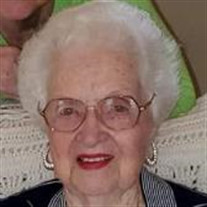 Ellen Barnes passed away on January 15, finally able to reunite with her husband of over 70 years, Silas (Si) Barnes. She was preceded in death by Si, her daughter, Sheila Barnes Stutsman, son-in-law Vernon Luckey, parents Myrtle and Alger Evans, brother Daryl Evans, and sister Lois Patterson. She is survived by her daughter, Sissy Luckey, and sister Darlene Watts. She is also survived by 6 grandchildren: Todd Stegall (Kim), Melissa Hannafey (Shane), Stacey Luckey, Maryellen Roberson (Mark), Chrissy Schwichtenberg (Kurt), and Kathy Ciorciari (Dennis) and 14 great-grandchildren. Many in Southwest Georgia came to know Ellen by her deep involvement and support in her community. She spent many years volunteering at Phoebe Putney Hospital through the Council on Aging group sewing teddy bears for children, the American Red Cross, the VFW, and American Legion. She held leadership positions for years at the VFW Ladies Auxiliary. She was also active in Lutheran Church of Our Savior’s Third Stagers group later becoming a member of Trinity Lutheran Church in Albany. Her dedication to her community was only eclipsed by her dedication to her family and her sense of adventure. Ellen’s adventures began when she left her hometown of Eagle Grove, Iowa after high school where she worked as a telephone operator. She travelled with a friend to San Francisco to do her part in WWII as a clerk typist, transcribing military documents through the end of the war. It was in San Francisco that she met and married her husband Si. They courted for only a few short weeks before taking a leap of faith and marrying on November 3rd, 1945. Ellen supported Si throughout his military career, making every assignment a home. They eventually settled into retirement in Putney, Georgia after stations in California, Hawaii, North Carolina and Georgia. Ellen’s adventures with Si continued into their retirement as they traveled the United States by car or RV for weeks on end. There are many family photos of the two of them in front of landmarks in their bright colored windbreakers. Si and Ellen loved to dance to big band music and danced well into their late 80s. Ellen was an avid gardener and animal lover from the time she was young and helped her parents tend to animals and the garden for food during the depression. She especially loved growing African Violets and Christmas Cactus; she shared that love of gardening and animals with her children and grandchildren. She also taught them how to make her sausage gravy and biscuits, can fruit and vegetables from her garden, and make jam and jelly. She could pinch a penny so hard it would scream for days and could often be found searching for great deals at Roses or Big Lots. Ellen loved to crochet; her beautiful throws were given to others or donated to babies at the hospital. Most of all, Ellen was a true matriarch of her family. She had a knack for knowing EVERYTHING that happened to everyone in the family. She was steadfast and resolutely supportive of every endeavor her daughters, grandkids, and great grandkids undertook. In her last years, she lived with her daughter and caregiver, Sissy. Being with her family brought her great joy. Ellen will be sorely missed by all who knew her and were touched by her kindness and compassion. Her funeral service will be held Friday January 22, 2021 at Andersonville National Cemetery. Rev Doug Hudson will be officiating. In lieu of flowers, the family requests donations in her memory to Trinity Lutheran Church in Albany, GA.

Ellen Barnes passed away on January 15, finally able to reunite with her husband of over 70 years, Silas (Si) Barnes. She was preceded in death by Si, her daughter, Sheila Barnes Stutsman, son-in-law Vernon Luckey, parents Myrtle and Alger... View Obituary & Service Information

The family of Mrs. Ellen Josephine (Evans) Barnes created this Life Tributes page to make it easy to share your memories.

Ellen Barnes passed away on January 15, finally able to reunite...

Send flowers to the Barnes family.