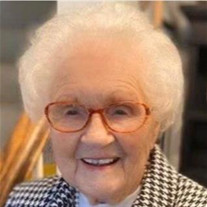 Elizabeth L. “Dolly” McDaniel entered into her heavenly rest on July 20, 2021. “Miss Dolly”, as she was known by everyone who loved her was born on March 3, 1922 in Ellaville, Georgia where she was raised on a farm until her family moved to Albany when she was a teen and remained here the rest of her life. After graduating high school, Dolly attended business school and then became a professional office manager for Westinghouse Electric Supply where she worked for over 30 years. Dolly met and married her husband Luke on July 13, 1941 and they had two children, Rick McDaniel and Donna Gray. Dolly was a member of Women in Construction (WIC) and also the Albany Garden Club. She loved gardening and always had a beautiful yard filled with flowers. She loved decorating her church for special events with her flowers, always wanting to be behind the scenes. She and her husband Luke were charter members of Sherwood Baptist Church helping to organize the church in 1956 and they were both very active in the early childhood Sunday School program. Dolly was also a member of the Agape Friendship Sunday School class. Dolly’s funeral will be held at Sherwood Baptist Church in the Chapel on Monday, July 26, 2021 at 2 PM. Visitation will be 1 hour prior to the service in the Atrium. The Reverends John Spencer and Tom Pollock will officiate. Interment will follow at Ellaville Cemetery at 4:30 PM. She was preceded in death by her parents, Minnie Jewel and Willie Lee Lumpkin, who was the local Sheriff of Schley County, GA; her loving husband, Luke McDaniel who was a veteran of WWII; a brother Charles Lumpkin and a brother W. F. (Bill) Lumpkin. She is survived by her son Rick (Eydie) McDaniel; her daughter, Donna Gray; a sister, Martha (AJ) Nobles of Albany and her grandchildren, Brian (Leslie) McDaniel, Louisville, KY; Keith (Amy) McDaniel, Leesburg, GA and Ivy (John) Savelle of Leesburg, GA, along with five great grandchildren, Lindsey and Elizabeth McDaniel of Louisville, KY, Desiree McDaniel, Leesburg, GA, and Bentley and Collier Savelle, Leesburg, GA; a special niece, Diane Webb (Billy), Leesburg, GA, as well as numerous other nieces and nephews. Those desiring to make memorials in memory of Miss Dolly can send them to Sherwood Baptist Church “Meet the Need” program at 2201 Whispering Pines Road, Albany, GA 31707, or The Albany Area Arts Council, 215 Jackson St., Albany, GA 31701. You may sign the online guestbook at www.kimbrellstern.com.

The family of Elizabeth L. "Dolly" McDaniel created this Life Tributes page to make it easy to share your memories.

Send flowers to the McDaniel family.