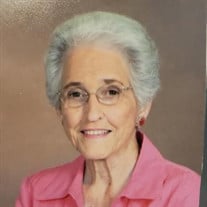 Mrs. Elizabeth “Toni” Grebel, 85, of Albany died Tuesday Aug 20, 2019 at Phoebe Putney Memorial Hospital. Her funeral service will be held Saturday 2:00PM at First Baptist Church of Albany with the interment to follow at Crown Hill Cemetery. The family will receive friends Friday from 6:00 to 8:00PM at Kimbrell-Stern. > The youngest daughter of Ben and Thelma Burroughs, Toni was born in Savannah on November 7, 1933. Growing up in Savannah with her sister Jane, she attended Asbury Memorial Methodist Church and spent her summers on her grandparent’s farm. After attending Savannah High School she moved, with her mother and sister, to Miami, Florida in 1950 and graduated from Miami High School. Beginning 33 years of life in Miami, Toni graduated from the Jackson Memorial Hospital School of Nursing with the intention of being a surgical nurse. But life intervened when her brother in law introduced her to Bob Grebel, a Miami firefighter and veteran of the Second World War. Marrying in 1954 she and Bob had three children, David, Robyn, and Susan. Intelligent, witty, and active, Toni was both a great mom and engaged friend. Active in the First Baptist Church of Perrine, she cheerfully accompanied the youth group of 50 teenagers in 1970 and rode her bicycle throughout Northern Europe. > With her children grown and scattered throughout the south Toni and Bob decided to return to Georgia in 1983 and begin the next chapter of their lives. For the next 36 years Toni lived and served in Albany. In spite of just having heart surgery she played a significant role in feeding the hundreds of responders to the Albany flood in 1994. After joining First Baptist Church, and out of her deep faith in and love for her Lord Jesus Christ, she founded and managed the Father’s Kitchen which provided a meal and a place to belong for her homeless and poor neighbors around First Baptist. After the church relocated she went to work with the Lord’s Pantry where, as lead counselor, she knew and called by first name the many people she served. > In her work, and in her life, Toni was caring, concerned about the needs of others, occasionally stern, and centered on her desire to make a difference. With Bob, and her friend Pam Nelson, she contributed to making her portion of Albany a more caring place. > In addition to her work Toni continued to exercise her gift of hospitality by making her home a center of love and activity for her children, grandchildren, great grandchildren, friends, and the many others who needed her open heart and generosity. She provided a loving gathering place, and occasional sanctuary, for both her family and friends. Christmas at grandma’s became a key part of her family’s life and she made certain that there was always a place for them. > Toni was kind and willing to extend love to anyone she encountered. At her death on August 20, 2019 she embraced the words of her faith, “well done, good and faithful servant” as she joined the great cloud of witnesses that included her parents and her husband. > Toni is remembered and deeply loved by her sister Jane Hawkins; her children David Grebel and his wife Katherine Godby, Robyn Spring, and Susan Byler and her husband Mark. Her stories will continue to be told by her grandchildren: Benjamin Lansford, Robert Grebel and his wife Jennifer Forester, Jessica Byler Burns and her husband Randy, Deborah Grebel-Becker and her husband Kevin Becker, the “triplets” Katie Grebel, Donnie Tollefson, and Luke Byler and his fiancé Callie Syfrett, and David Tollefson and his wife Nikki. Bringing bonus energy and love to Toni’s life were her great grandchildren: Morgan Forester-Grebel, Lily Tollefson, Piper Edwards, and Eleanor Grebel-Forester. And most of all, she will be deeply missed by her dearest friend of almost 40 years Pam Nelson. In lieu of flowers, you may make donations to the Lord's Pantry, 219 W. Society Ave., Albany, GA 31707. You may sign our online guestbook and share your own special thoughts with the family of Mrs. Grebel by visiting Kimbrell-Stern’s website at www.kimbrellstern.com. > >

The family of Mrs. Elizabeth "Toni" Grebel created this Life Tributes page to make it easy to share your memories.

Send flowers to the Grebel family.