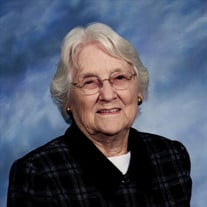 Elizabeth “Bess” Samson English Fuller, 98, passed away peacefully on Tuesday, June 9, 2020, in Albany, GA. A memorial service is planned for Saturday, June 20th at 1:00pm in the prayer garden of First Baptist Church of Albany. Rev. Butch Knight will officiate. A graveside service will be held at Brownwood Cemetery in Sandersville, GA at a later date. Bess was born December 9, 1921 to Leonard Edwin and Janette Harris Samson in Sandersville, GA. She attended Sandersville High School where she played basketball and graduated after 11th grade, just one year before 12th grade was instituted as a requirement. After high school, she worked for Sears in downtown Atlanta and frequently boasted of the time she earned a half-cent raise in pay. She enlisted in the Women's Army Corps, where she served in San Francisco and Paris during World War II, receiving an honorary discharge on November 11, 1945. While in Paris, she reunited with Pete English, an old friend from Sandersville High. After the war, she promised to marry Pete if they could find an apartment in Athens. So, on the morning of Saturday, March 30, 1946, he found a place that was suitable and they married that afternoon, returning to Athens for their honeymoon! Bess studied art at the University of Georgia and provided illustrations for the UGA student literary magazine. Upon Pete’s graduation, they moved to Albany and established a bookkeeping service for many family owned businesses throughout the area. After Pete’s death in 1984, she married Bud Fuller in August of 1989 and spent the next twenty years traveling the world with him. A longtime member of First Baptist Church of Albany, Bess loved her Sunday School class and enjoyed keeping the nursery and teaching 3rd grade GAs. She was a former member of Daughters of the American Colonists and served the community for many years by delivering Meals on Wheels for the SOWEGA Council on Aging. In addition to her parents, Bess was preceded in death by husbands Roy “Pete” English and Wayne “Bud” Fuller, and her sister, Mary Elice Lavender Boone. Survivors include her children, Roy & Cathy English of Toccoa, GA and Jan & Greg Duke of Leesburg, GA; her step-children, Nancy Fuller of Columbus, GA and Mark & Kim Fuller of Plains, GA; her grandchildren, Jennifer & Bill Zigan of Toccoa, GA, Barbara Cornett of Leesburg, GA, Meghan Duke of West Point, GA, Dylan & Rita Duke of Columbia, IL, Adair Duke and Colby Duke of Atlanta, GA, Landon Duke of Winston-Salem, NC, Mandy & Charles Barr of Americus, GA and Bud Fuller of Adel, GA; her great-grandchildren, Camryn, Tyler, Haley and Patyn Zigan, Franklin “BG” and Jonah Harris, Grady and Baeli Cornett, Savannah and James Duke, Riley, Emily, and Cuyler Barr, and Cyrus Fuller; along with many nieces and nephews. The family would like to thank the staff of The Phoenix of Albany for their continuous loving, attentive care over the last several months of Mrs. Fuller’s life. In lieu of flowers, contributions may be made to First Baptist Church “Forward: No Looking Back,” 145 Oakland Parkway, Leesburg, GA 31763, or firstalbany.org/give.

The family of Mrs. Elizabeth Samson Fuller created this Life Tributes page to make it easy to share your memories.

Send flowers to the Fuller family.