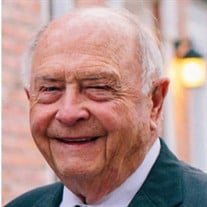 Edgar W. “Ed” DUSKIN, Colonel, United States Army (Ret.) passed away at his home the evening of Sunday, August 1st, 2021. Col. Duskin was born July 15, 1928, in Dawson, GA to Jack and Theodosia Duskin. He was active in the Boy Scouts of America and achieved the rank of Eagle Scout. He graduated from Terrell County High School and was then accepted to the Citadel, a private military college in Charleston, SC. In 1948 he married the love of his life, Ann Oliver in Washington DC. Together they embarked on a long and eventful military career. Colonel Duskin served active duty in the Army from 1948 to 1972 as an Infantry Officer. During the Korean War he served in the Korean Military Advisory Group as Intelligence Advisor to the Republic of Korea’s II Corps. Following the War, Colonel Duskin was assigned to United States Army Europe Headquarters Intelligence staff from 1956-1959. During the Vietnam War he served as attaché to Laos. Upon his retirement from the Army in 1972, Colonel Duskin served as a consultant on Laos to the Department of the Army. Colonel Duskin’s awards include the Distinguished Service Medal, The Legion of Merit (2 awards), the Bronze Star (2 awards), numerous foreign awards and decorations, the Department of the Army General Staff Badge, the Combat Infantry Badge, and Master Parachutist jump wings. After retirement, the family returned to Dawson, and he began working with his father at his grain trading and processing business. In 1973 he was offered and accepted a position with Southern Agricultural Chemical Association (SACA). In 1983 Ed helped to transition SACA into the Southern Crop Protection Association (SCPA) and took a position as its Executive Vice President and CEO where he served until his retirement in 2016. Ed was also active in local redevelopment, serving as a member of Rotary International, the Dawson Downtown Development Authority, the Terrell County Industrial Development Authority and the Terrell County Historic Preservation Society for many years. He was a pivotal member of the Church of the Holy Spirit, an Episcopal Church in Dawson, Ga. Ed is survived by his beloved wife of 72 years, Ann; two children: Edgar W. Duskin Jr. (Carolyn) and Abigail Duskin Rakel (Paul); three grandchildren: Trey Duskin (Noelle), Dr. Mary Catherine Duskin; Olivia Rakel-Robinson (Richard),and one great-granddaughter, Rebecca Ann Robinson. In lieu of flowers donations can be made to the Church of the Holy Spirit in Dawson, Ga. An internment service will be held at 11:00 AM April 16, 2022, at Cedar Hill Cemetery in Dawson, Ga. He is greatly missed.

The family of Col. Edgar W. "Ed" Duskin, US Army (Ret.) created this Life Tributes page to make it easy to share your memories.

Send flowers to the Duskin, US Army (Ret.) family.