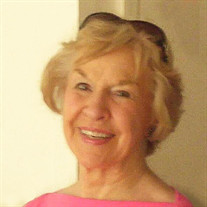 Dorothy Ruth Shugart Peters, 92, passed away peacefully, April 26, 2020, in Albany, Ga with her family at her bedside. The youngest daughter of Ruth Church and William Yelverton Shugart, she was born November 8, 1927, in Ft Payne, AL. She had a wonderful childhood growing up there with siblings Bill, Dick and Peggy, where her father managed and then owned a hosiery mill. She grew up surrounded by love, kindness and the beautiful mountains that she always loved. She attended Huntingdon College and the University of Alabama, earning a degree in textile design. After college, she married W. Glenn Hicks and moved to Albany, GA, where her three daughters were born. She later earned a M.Ed. and began her career in the Dougherty County School System, Albany, Georgia, where she worked as a teacher, administrator, and reading specialist. She loved teaching and was very dedicated to doing what was best for her students. She made many good friends throughout her career. Kindness was her strength. Her design and sewing skills were legendary- she could and did make anything - from her own wedding dress to Barbie clothes to designer pillows. Her daughters laugh that she would be putting the final stitch in an outfit for them as their date was ringing the doorbell. She was always a fun loving, actively involved mother and later, grandmother, who could make an average day something special – like when she would stop at the end of the alley and let her daughters ride home on the hood of the car- singing at the top of their lungs. Her granddaughters remember swinging in her backyard, treasure hunts, cooking, painting, and spending the night. She thought all her sons-in- law and granddaughters were special; each had a loving relationship with her. Her backyard was almost always blooming with something as she enjoyed nothing more than being outside and gardening. The big swing that hung from the Live Oak was one of her favorite spots. After the death of her second husband, Lt Col Sheldon Classon, she retired and spent several summers working in Rocky Mountain National Park, Estes Park, CO. The group of friends she formed there continued to get together for many years. She met her third husband, Harold “Pete”Peters, in Sunday School class at Porterfield UMC. At their wedding, all nine of their granddaughters were attendants. They were married until his death in 2016. Over the years she was involved in Girl Scouts, Delta Kappa Gamma ,Golden K Kiwanis, Chi Sunday School Class and UMW Circle 4 at Porterfield UMC where she was a longtime member. Dorothy is survived by her sister, Peggy Cadenhead, and daughters, Carol Fleming (Garrett), Julia Hale (Drew), and Peggy Meyer von Bremen (Michael). She is also survived by six grandchildren, Betsy Clay (Justin), Margaret Fleming, Meg Robinson (Matt), Welsley Jongko (Aaron), Carson Hale, and Anna Hale. There are 4 great grandchildren, Walker and Lanier Clay, Bremen Robinson, and Collier Jongko. Due to Covid-19, a family Memorial will be held on Mother’s Day. In lieu of flowers, contributions may be made to: Albany Humane Society, 1705 W Oakridge Dr., Albany, GA ,31707; Salvation Army, 304 W Second Ave, Albany, GA 31701 or Private Residence Inc. (an addiction recovery facility for women), 533 Pine Ave, Albany, GA 31701.

Dorothy Ruth Shugart Peters, 92, passed away peacefully, April 26, 2020, in Albany, Ga with her family at her bedside. The youngest daughter of Ruth Church and William Yelverton Shugart, she was born November 8, 1927, in Ft Payne, AL. She had... View Obituary & Service Information

The family of Mrs. Dorothy Ruth Shugart Peters created this Life Tributes page to make it easy to share your memories.

Send flowers to the Peters family.