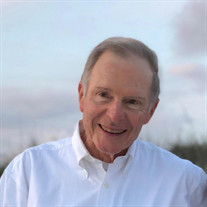 Donald “Don” Henry Bravaldo, Jr., beloved husband, father and grandfather, passed away peacefully at home in Auburn, AL on Wednesday, July 1, 2020, at the age of 86. He is preceded in passing by his father, Don Bravaldo, Sr. (Big Don) and his mother Margaret Lambe Bravaldo. He is survived by his wife of 55 years Joyce H. Bravaldo, his son Don Bravaldo, III (Aury), his daughter Blythe Bravaldo Shiland (Stuart), his grandson Hudson Henry Shiland, and many cousins and extended family. Don was born on January 8, 1934 in Albany, GA to parents Don and Margaret Bravaldo. He graduated from Albany High School (AHS) in 1952. Don attended Auburn University, graduating in 1956, where he received a Bachelor of Science in Industrial & Systems Engineering. While attending he was a member of Phi Delta Theta social fraternity, as well as Phi Kappa Phi honorary scholastic fraternity. He was a proud veteran who served in the US Army with the Army Corp of Engineers (1956-1958), where he was stationed in Fort Lewis, Washington. Don later returned to his hometown of Albany, where he began working for Bob’s Candies, Inc in 1959. He worked in various roles for 43 years, concluding in a role of Vice President of Operations. He proudly served three generations of family owners during his tenure, and he loved the people and families that made Bob’s such a special place to work. He was affectionately known by many in the community as “the Candy Man”. On February 11, 1965 he married Joyce H Hurst. They raised two children, Don and Blythe. Don had a passion for spending time at the beach, specifically the Florida Gulf Coast. At age 85, his family still had a hard time getting him to come inside after spending the day enjoying the ocean. He was an avid exerciser, enjoyed long walks, bird watching and tinkering with household projects that would frustrate most people. For him, a “fix-it” project was a relaxing way to spend a Saturday. And of course, he loved Auburn University, especially Auburn Football! Don was a lifelong Presbyterian and counted himself fortunate to be a member of the First Presbyterian Church of Albany, GA, and later the First Presbyterian Church of Auburn, AL. He was a past Deacon and Elder of First Presbyterian Church of Albany. Don also served as a member of the local board of directors of the American Red Cross. He also volunteered his time with the Salvation Army and helped to start a community resource outreach program. Funeral services will be held Monday July 6th at 1pm at First Presbyterian Church of Albany, Georgia with interment to follow at Crown Hill Cemetery. The Reverend Josh Bower will officiate. Due to COVID-19, facial masks and social distancing will be required. Masks and hand sanitizer will be available during the services. If you are unable to attend, you are welcome to view the service on First Presbyterian Church’s facebook page: www.facebook.com/FirstPresAlbany/ For those in Albany,in lieu of flowers, those desiring may make memorial donations to the First Presbyterian Church of Albany, GA: www.1stpresalbany.org/give, or to the American Heart Association. For those in the Auburn/Opelika area, in lieu of flowers, those desiring may make memorial donations to the First Presbyterian Church of Auburn, AL: www.fpcauburn.org/give, or to the American Heart Association.

Donald &#8220;Don&#8221; Henry Bravaldo, Jr., beloved husband, father and grandfather, passed away peacefully at home in Auburn, AL on Wednesday, July 1, 2020, at the age of 86. He is preceded in passing by his father, Don Bravaldo, Sr. (Big... View Obituary & Service Information

The family of Donald H. Bravaldo, Jr. created this Life Tributes page to make it easy to share your memories.