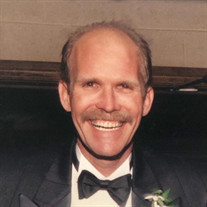 David Allen Turner, Jr., PhD., age 65, died September, 14, 2020 with his loving family by his side at his home in Ypsilanti, Michigan. David was a United States Air Force (USAF 1978 - 1983) veteran and an accomplished artist, musician, and scientist. David was born in Augusta, GA on September 7, 1955, and was the third child of Dr. David Allen and Clara Faye (Bolton) Turner. His father was a flight surgeon in the USAF, and the family lived in Germany and San Antonio, TX before settling in Albany, GA. David graduated from Westover High School in Albany in 1973, and attended the University of Georgia and Southern Methodist University in Dallas before enlisting in the USAF in 1978. He graduated from the Defense Language Institute in Monterey, CA in 1979 after completing a 47-week Russian language course, and served as an airborne linguist assigned to the 6990th Electronic Security Group at Kadena Air Base, Japan for several years. David earned his BS in 1985 from Georgia Southwestern College before moving to Detroit to earn his MS (1987) and Ph.D. (1994) in Biological Sciences from Wayne State University where he met his wife, Kamilah (Wakim) Turner. David and Kamilah then moved to Ypsilanti, MI, where David completed a postdoctoral fellowship with the University of Michigan, in Ann Arbor, MI. Together they had two sons, Marley Allen (1994) and Dylan Milad (1997), and they collaborated on an art jewelry business for many years. After a 3-year stint as a pharmaceutical sales representative, David spent two years as a research assistant professor in the Neuroscience department at the Medical College of Ohio where he conducted biomedical research and contributed to the training of graduate and medical students. In 2004, David accepted a civilian position with the USAF Drug Testing Laboratory in San Antonio, TX and worked as a forensic toxicologist and expert witness until retiring in 2017. David had an avid interest in music, and played harmonica with innumerable bands from his youth until his last days. He was a founding member of the Luddites of Detroit, and he always seemed to have a harmonica in his pocket and a knack for joining any given band on stage for a song or two. David is survived by his wife Kamilah of 30 years, his sons, Marley and Dylan, Marley’s fiancée, Franchesca Leguen and son Thasiyah. Also surviving are his mother, Faye Turner, sisters and their spouses Nancy and Scott Brown, and Susan and Richard Winston, and mother and brother in law Carol Sessions and Gordon Wakim. David is also survived by his nieces and nephew, Annalee Wilkin, Clara Winston, Margaret Brown, and Becky and Dan Drake, and great nephews Mitchell Glausier, Logan Elder and Scott Drake. David was preceded in death by his father Dr. David Allen Turner, Sr., and his father in law, Milad Nimr Wakim. David also leaves behind numerous brothers by other mothers; they know who they are. David’s gregarious nature and extensive travels enabled him to touch and greatly enrich the lives of many people. He was a genuinely funny and creative and intelligent person that would instantly light up a room, and he will be sorely missed by all who were fortunate to meet and know him both personally and professionally. Those who would like to send memorials in David’s honor may contribute to a homeless shelter in their community. A celebration of David’s life will be held on a date yet to be determined. Please email [email protected] to be informed as plans develop.

David Allen Turner, Jr., PhD., age 65, died September, 14, 2020 with his loving family by his side at his home in Ypsilanti, Michigan. David was a United States Air Force (USAF 1978 - 1983) veteran and an accomplished artist, musician, and... View Obituary & Service Information

The family of David Allen Turner, Jr., PhD. created this Life Tributes page to make it easy to share your memories.