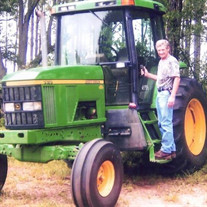 Claude Junior Hammock, born January 1, 1947, passed peacefully to his heavenly home, Friday August 20, 2021, surrounded by his loving family. Visitation will be one hour before service with masks to be worn at the family's request. His funeral... View Obituary & Service Information

The family of Mr. Claude Junior Hammock created this Life Tributes page to make it easy to share your memories.

Send flowers to the Hammock family.