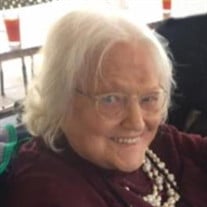 Clara Louise Jordan Bennett of Albany, Georgia, died Wednesday, April 8, 2020, from COVID-19. She was 91 years old. She is survived by three sons, Jay, Jon, and Joe of Indian Harbour Beach, Florida; Chattanooga, Tennessee; and Sammamish, Washington, respectively; her beloved sister, Katie Sue Gunnels, of Albany, Georgia; a particularly close cousin Drucilla Fox of Jackson, Georgia; nine grandchildren, six great-grandchildren, and numerous nieces and nephews—all of whom affectionally know her as “Grammy.” She is the sister-in-law of Barbara Bennett Pippin, James Frank Bennett, and Bruce Gunnels (all of Albany) and Wyolene Bennett Walker of Tifton. Mrs. Bennett was born on June 1, 1928, in Miami, Florida, to Mr. Clarence H. Jordan and Mrs. Lizzie Lou Drew Jordan, known generally as “Mimi.” Shortly thereafter, her family moved to Georgia where she grew up in Ellaville and Americus. She moved to Albany in her junior year of high school where she met her future husband, Jay Donald Bennett. They both were graduated from Albany High School in 1945. She was fond of school, President of her Senior Class, a cheerleader, and a member of the Beta Club. Mrs. Bennett attended Bessie Tift College in Forsyth, Georgia, but only for one year. Showing her true nature, upon her father’s death she abandoned her own college career to return home to support her mother and younger sister by taking a job at Southern Bell. She would work there for 33 years in Albany and in Chattanooga before her retirement. On September 17, 1950, Mrs. Bennett and J. Donald Bennett were married at the First Baptist Church in Albany. They remained married for 53 years until Mr. Bennett’s death in 2003. For most of that time (44 years) the family lived in or near Chattanooga, Tennessee, close to where Mr. Bennett practiced law in north Georgia. Upon her husband’s death, Mrs. Bennett moved back to Albany to be close to her sister and other friends and relatives. Mrs. Bennett’s devotion to family and commitment to education remained lifelong traits. She personally sacrificed so that all three of her sons would have the opportunity to attend the McCallie School in Chattanooga and go on to excellent colleges. Later in life, she would call her grandchildren on their first day of class each year to sing them a song about school. She freely shared her joy of learning and passion for life with those she met. Mrs. Bennett was steadfast in her faith and a member of the First Baptist Church in Chattanooga and later the Central Baptist Church in Albany. An honest and benevolent woman, known for her good-natured persuasion and admired for her sunny disposition, Mrs. Bennett wrote poems for important occasions. Her verse, characterized by a playful and folksy lilt, will remain an enduring legacy among all who knew her. Everyone’s birthday and phone number she kept in her head; she was crazy about Elvis and the color red. She was kind and friendly to everyone. She was compassionate and generous. She had great insight about people. She died lamented as she lived esteemed. Her family expresses its gratitude and thankfulness for Ms. Kwajalein Guest of Albany who has been for the last two years an exceptionally loving and skillful caretaker for Mrs. Bennett. Her family also wishes to thank the devoted staff at Wynfield Park Health and Rehabilitation for their kind and professional care of Mrs. Bennett and their consideration of her family during the last two years of her life on Earth. Because of the coronavirus, the small graveside burial service will be private. A memorial service and celebration of her life will be announced later. In lieu of flowers, the family suggests that those who are so inclined donate to the Phoebe Foundation coronavirus relief fund, which is providing vital support to the residents of Mrs. Bennett’s hometown in their hour of need. https://www.supportphoebe.org/phoebe-foundation/areas-to-support/programs/coronavirus_relief

The family of Clara Bennett created this Life Tributes page to make it easy to share your memories.

Send flowers to the Bennett family.