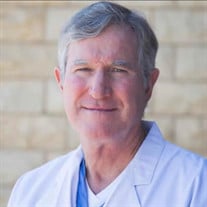 Dr. Christopher (Chris) Campbell Smith, 68, a general surgeon in Albany, GA since 1983, died on Saturday, May 29, 2021. Dr. Smith was born on July 8, 1952 in Tifton, Georgia, the fourth of six children to Cecilia Travis Smith and William T. Smith, DDS. Dr. Smith and his loving wife of 45 years, Helen “Sissy” Chance Burgstiner Smith, were married in 1976 in Savannah, GA. He was a devoted husband, son, father, grandfather, and mentor to countless young people and physicians. Dr. Smith was reared in Tifton and attended Tift County public schools. He graduated from the University of Georgia where he received his B.S. in zoology and received his M.D. from the Medical College of Georgia in 1978, thereby making him a very proud “Double Dawg.” Upon receiving his M.D., he completed his general surgery residency at Georgia Baptist Hospital of Atlanta, now called Atlanta Medical Center. He and Sissy moved to Albany, GA in 1983, where his sister and brother had established legal and medical practices. A Diplomate of the American Board of Surgery and a Fellow of the American College of Surgeons, Dr. Smith was also a founding charter member and first President of The Georgia Society of General Surgeons (GSGS), an influential group on behalf of patients and the recognition of general surgery by the state of GA as a surgical specialty, thereby allowing general surgery to be done in surgery centers at great savings, convenience and safety to patients. The GSGS then united with the Georgia Chapter of the American College of Surgeons and elected Dr. Smith the first President in the fused organization of The Georgia Chapter of the American College of Surgeons. Dr. Smith was a member of The Albany Rotary Club, The Society of the Cincinnati in The State of Georgia, Past-President of the Dougherty County Medical Society, and Director on the Board of the Georgia Medical Society since 2007. Dr. Smith was widely recognized as an innovator in anti-reflux laparoscopic surgery, with many Georgia “medical firsts” in his background. His highly cited articles, published in the New England Journal of Medicine and the Annals of Surgery, built a national profile. Though his loved ones took pride in his academic achievements, Dr. Smith treated these accomplishments lightly, seeing them as distractions from his real work of caring for patients. A multidimensional man of many interests and passions, he was a diehard Georgia Bulldawg fan, an accomplished golfer, and an expert horticulturist. He proudly showed photographs of his beloved orchids to friends and co-workers, and occasionally gifted a fortunate recipient with a magnificent specimen he grew. Outside of his greenhouse, he was an avid golfer, mountain hiker, dedicated cyclist, and enthusiastic scuba diver. Dr. Smith and Sissy were active and dedicated members of Covenant Presbyterian Church. A committed Christian, he always sought the Holy Spirit’s guidance to further the glory of God. He was known to take time to pray with his patients and went on two medical mission trips to India. The world seems diminished by the loss of such a loving, dynamic, generous and kind person. Yet Dr. Smith’s life of committed service enriches and inspires all who knew him. He was preceded in death by his parents Dr. William T. Smith and Cecilia Travis Smith, his brother Gordon Burns Smith, his sister Judge Nancy S. Stephenson, and his in-laws Dr. Carson Bertelle Burgstiner and Helen Sharpe Burgstiner. Survivors include his loving wife of 45 years, Helen “Sissy” Burgstiner Smith; three children: Cadence Chance of Alameda, California, Campbell Smith (Heather) of Albany, Georgia and Cecilia Smith of Asheville, North Carolina; and Grand-Daughter Norah Rhodes Smith; his siblings, Dr. Bruce Alexander Smith (Mary Jane) of Lake Oconee, Georgia; Dr. Livingston Travis Smith (Cheryl) of Lutz, Florida, and Dr. Cecilia McKay of Portland, Oregon; and his in-laws, Judge John M. Stephenson of Albany, Georgia and Anna Habersham Smith of Savannah, Georgia; and his loving dog Sugabear. Dr. Christopher Smith loved keeping up with his many numerous nieces and nephews, all of whom he dearly loved. Visitation will be at Kimbrell-Stern in Albany, GA on Friday, June 4, 2021 from 5:00-7:00 PM. The service will be at Covenant Presbyterian Church in Albany, GA on Saturday June 5, 2021 at 11:00 AM, with internment in Tifton, GA. In lieu of flowers please donate to your favorite charity in his memory.

The family of Dr. Christopher (Chris) Campbell Smith created this Life Tributes page to make it easy to share your memories.

Send flowers to the Smith family.