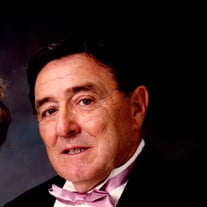 Charles Herbert Findley, Sr., 88, of Albany, died Sunday, September 26, 2021 in Tallahassee, FL. His memorial service will be at 11 AM on Friday, December 3, 2021 at Covenant Presbyterian Church. His cremated remains will be buried at Crown Hill Cemetery. The visitation for Mr. Findley will be at Covenant Presbyterian Church prior to the service beginning at 10 AM. Mr. Findley was born in Maxeys, GA and moved to Albany in 1957. He graduated from Comer High School and served in the U. S. Army. Mr. Findley retired from Bell South in 1985. He was a member of Covenant Presbyterian Church. Mr. Findley was a member of the Moose Lodge, Telephone Pioneers of America, and a lifetime member of the Elks Lodge #713 where he was named Elk of the Year in 1975-1976 and 1996-1997. He enjoyed watching his sons play sports; he served as President of the Dixie Little League and was active many years; he also served as President of the Albany High School Booster Club in 1977. He was a lifelong UGA Bulldog fan and an Atlanta Braves fan. Mr. Findley enjoyed fishing at Mexico Beach and being around his supper club friends. He was preceded in death by a son, Eddie Hammond, Jr., and his siblings, Virginia Ann Findley Miller, Eudora Findley, Susan Margaret Findley Derringer, Elizabeth Hale Findley Kluge, Patricia Findley Sower, John William Findley, Sr., James Robert Findley, Jr., his parents James Robert Findley and Clara Noel Findley. Mr. Findley is survived by his wife: Winnie Rich Findley, Albany; 2 sons: Chuck Findley (Lisa), Pendleton, IN, Rusty Findley (Suzanne Lex), Tallahassee, FL; 1 grandson: Jarrod Findley, Tallahassee, FL. Those desiring may send memorials to The Elks National Foundation, 2750 N. Lakeview Ave., Chicago, IL 60614, or The Albany Rescue Mission, 604 N. Monroe St., Albany, GA 31701. You may sign the online guestbook at www.kimbrellstern.com.

Charles Herbert Findley, Sr., 88, of Albany, died Sunday, September 26, 2021 in Tallahassee, FL. His memorial service will be at 11 AM on Friday, December 3, 2021 at Covenant Presbyterian Church. His cremated remains will be buried at Crown... View Obituary & Service Information

The family of Charles Herbert Findley, Sr. created this Life Tributes page to make it easy to share your memories.