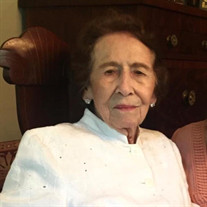 Carolyn Braswell Holman was born on May 16, 1924, in the home of her maternal grandparents, William Miller Mathews and Carrie Cooper Mathews, in Fort Valley, Georgia. She was the first child born to Robert Samuel Braswell, Jr. and Mildred Elise Mathews Braswell. Her early childhood was spent with her loving, extended family in Fort Valley where she and her paternal grandfather, Robert Samuel Braswell, Sr., shared great adventures on his farm, Nokomis, and in his dry goods store in town. He taught her many important life skills, including how to rig a fishing pole and hook a worm, how to make a corn cob pipe and find Indian tobacco to smoke; and, when she was the ripe old age of 9 years, how to drive a model T Ford. She shared many stories over the years of how they bounced and sputtered across the fields in that Model T while she learned the intricacies of changing gears and mastered her driving skills. At 12 years old, Carolyn moved with her family to Waco, Texas, when her father was transferred with the Coca Cola Company, and at 17, in 1941, she was graduated from Waco High School. With her life-long closest friends from Waco, Mary Fran, Jane, Ouizie, and Maggie, she entered the University of Texas in the fall of 1941, and all five of those inseparable girls pledged the Pi Beta Phi Sorority. Carolyn always claimed that the sorority wanted Mary Fran, but she wouldn’t join without her best friends. That close friendship continued until the last of the girls passed away five years ago. It was during her third year at UT that a friend introduced Carolyn to William Clinton Holman, Jr., a dashing pilot in the Army Air Corps who was in his final training assignment before deployment to Ipswich, England. (From that post, he flew 30 bombing missions in the European theater in World War II in support of allied ground troops.) After a brief courtship, they were married on March 19, 1944, just a couple of months before William’s deployment. At the end of the War, Carolyn moved to Albany with her husband and her baby daughter, Hope. Carolyn, along with her husband was an avid wild life and nature lover, and they belonged, for many years to the local Audubon Society. They spent many days “in the field” studying local and migratory bird populations as well as native plants and flowers. As a member of the Albany Hospital League, later the Albany Jr. League, she was an enthusiastic participant the annual “Folies”, an original musical production performed to raise money for Phoebe Putney Memorial Hospital. And she could be found every week at the hospital, serving as a “candy striper“, volunteering to assist patients and visitors. Perhaps most important in her life were her faith and her church. Descended from a long line of Methodist, and a few Baptist, ministers, she was a long time member of First United Methodist Church in Albany and a dedicated member of the Fellowship Sunday School Class; and, perhaps in a spirit of ecumenism, an honorary member of Saint Cecelia’s Guild at Saint Paul’s Episcopal Church, also in Albany. After a lengthy and valiant fight against the onslaught of a terrible disease, Carolyn Holman passed from this earth at her home on Thursday, January 20, 2022. She was attended by her skilled and compassionate caregivers, Juanita Williams, Sharlotte Crimes and Vivian Byrd. And she was surrounded by her loving family. She is preceded in by death by her husband of 66 years and by her brother Robert Samuel Braswell, III, of Waco, Texas. She is survived by her daughter, Hope Holman Campbell and her husband Bruce of Albany, her son William Clinton Holman, III (Bill) of Albany, and her son Edward Vason Holman and his wife Lynn of Chester, Virginia. She is also survived by five granddaughters, Ella Fitzpatrick Campbell and her life partner Regina Baggs of Atlanta, Misty Dawn Holman and her life partner, Cara Rose Brewer of Las Vegas, Nevada, Carrie Preston Holman Malone and her husband Paul, and Megan Elizabeth Holman and Anna Grace Holman of Chester, Virginia. She has one great granddaughter, Bailey Lanier Malone of Albany and numerous nieces and nephews in Albany and in Waco, Texas. Carolyn Holman’s memorial service will be at 11 AM on Friday, January 28, 2022 at First United Methodist Church. The Rev. Jim Morrow will officiate. The family will receive friends prior to the service at First United Methodist Church beginning at 10 AM. Those desiring may send memorials to First United Methodist Church, 307 Flint Ave., Albany, GA 31701.

Carolyn Braswell Holman was born on May 16, 1924, in the home of her maternal grandparents, William Miller Mathews and Carrie Cooper Mathews, in Fort Valley, Georgia. She was the first child born to Robert Samuel Braswell, Jr. and Mildred Elise... View Obituary & Service Information

The family of Carolyn Braswell Holman created this Life Tributes page to make it easy to share your memories.

Send flowers to the Holman family.