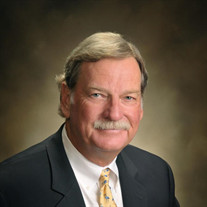 On Sunday, November 1, 2020, Carl Richard “Rick” Langley, a loving husband, father, brother, and uncle passed away peacefully at age 71. Rick was born on November 23, 1948 in Albany, Georgia to Carl Walker Langley and Eoline Sawyer Langley. He graduated from Albany High School in 1966 before attending Emory University. He received his Juris Doctorate from the University of Georgia School of Law and began practice in 1973. Rick practiced law for more than 40 years, focusing on the healthcare industry, general business, and litigation. He served as the president of the Dougherty Circuit Bar Association and was a founding member of the Health Law Section of the State Bar of Georgia where he served on the original board as chairman. He founded Langley & Lee, a private law firm, in 1990. Rick loved the law. He also served as a founding director for Albany Bank and Trust and a past president for the Board of Directors at Doublegate Country Club. Rick enjoyed travel, golf, and nature. He and his cadre traveled near and far to golf and hunt. They also met around a fire at Lake Blackshear, cooked meat, told tall tales and tried to solve the problems of the world. He traveled to North Carolina as often as he could to visit his kids and grandchildren, Elizabeth Rosales Langley, Rosemary Hall Langley, and Wyatt Hunter Langley, who fondly knew him as “Zeusy”. Rick loved life. He was known for his optimism and his incredible wit. Rick was preceded in death by his mother, father and older sister, Linda Langley Hanie. He is survived by his loving wife, Marci Langley, his sister, Laura Langley of Royal Tunbridge Wells, UK, his children, Lauren (Sandy) Langley of Wilmington, NC and Walker (Eva) Langley of Charlotte,NC, his step-daughter, Becca Lane of Nashville, TN, and his grandchildren, nieces and nephews. A family only, private funeral service will be held at a later date. A celebration of his life will be held at Doublegate Country Club from 5:00 p.m. to 7:00 p.m. on Friday, November 6, 2020. Friends are welcome to drop in and social distancing will be respected. In lieu of flowers, those desiring may make memorial donations in memory of C Richard Langley to Phoebe Hospice, 320 Foundation Lane, Albany, GA 31707.

The family of Carl Richard "Rick" Langley created this Life Tributes page to make it easy to share your memories.

Send flowers to the Langley family.