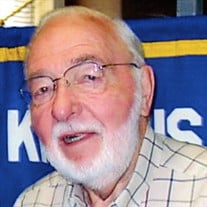 Mr. Boyd Aultman Coburn, 91, of Albany died Sunday, August 25, 2019 at Phoebe Putney Memorial Hospital. A memorial service will be held 2:00 on Friday, August 30, 2019 at Sherwood Baptist Church with Rev. Michael Catt officiating. Visitation will be immediately prior to the service in the church atrium at 1:00. Mr. Coburn was born in Fitzgerald, Georgia on September 3, 1927. During his teens he was a deejay at the radio station and taught junior lifesaving at Bowens Mill. Another pastime was reading on his front porch swing. He served in the Air Force post World War II as a lineman at Eglin Field in Florida. He attended Emory at Valdosta, then completed law school at Emory University in Atlanta. During his time at Emory he drove a Fitzgerald neighbor, Barbara, back and forth to school at Wesleyan on the weekends. He attended dances at Wesleyan with Barbara; their favorite song was Stardust. He and Barbara married on April 3, 1955, and they lived in Albany since 1957. He retired as purchasing agent from Water, Gas, and Light after 32 years of service. Early on his father, Barney, took him to Brush Arbor singing, quartets, the LeFevres, Statesmen, and Chuck Wagon Gang. He and Barbara went to Atlanta for plays at the Fox and all-night sings with Hovie Lister and more. Music threads throughout the years included collections of LPs, 43 1/3s, eight tracks, cassettes; and taping, listening and sharing a love of music of all types with the girls and grandkids. At one time the family took part in every music opportunity at Sherwood included several decades in the adult choir as well as service in the handbell choir and youth choir. Mr. Coburn served actively at Sherwood Baptist Church as a Deacon, a boys’ Sunday School teacher, an adult Sunday School teacher and department head. He and Barbara served on many committees and prepared communion for many years. As a father, he was stable and steadfast, loving and patient, sharing time and talents as needed. He planned vacation trips with the family in mind including Disney Land, Carlsbad Caverns, Yosemite, Yellowstone, Badlands of South Dakota, Mount Rushmore, and Nashville. The family enjoyed trips to Georgia Parks in a pop-up camper. After retirement Mr. Coburn took piano lessons from Darton College instructor, Richard Miller. He wanted to learn to play by ear and brush up on the skills he learned as a boy. He joined Albany Golden K Kiwanis and played piano at their meetings each week. He also served as President and Club Secretary for many years. Boyd and Barbara travelled to Europe each year and took the girls on a month-long trip there to share the many wonders that had opened their horizons. Highlights included Les Misérables in London to the Palace of Knossos in Crete. He was preceded in death by his parents, Barney and Ione Coburn; and his wife of 64 years Barbara Walker Coburn. He is survived by one sister Sandra C. Robinson of Atlanta, GA; his two daughters Carol Bishop (Joe) and Leah Masters (Chuck); his six grandchildren Matthew Bishop (Mary), Philip Bishop (Anna), Sarah Keadle (Karl), Katherine McMahon (Kieran), Margaret Harris (Ryan), Andrea Sandbach; and four great-grandchildren Kellan Keadle, Augustus Bishop, Josephine Bishop, and Emma McMahon. In lieu of flowers, please make donations to Sherwood Baptist Church, 2201 Whispering Pines Rd, Albany, GA 31707.

The family of Mr. Boyd Aultman Coburn created this Life Tributes page to make it easy to share your memories.

Send flowers to the Coburn family.