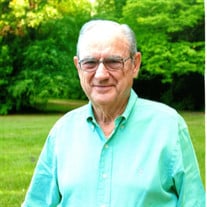 Bobby Joe Johnston passed away unexpectedly at his home on Thursday, July 15, 2021. His funeral service will be held at 11 AM on Tuesday, July 20, 2021 at Kimbrell-Stern with, interment to follow at Crown Hill Cemetery. The Rev. Josh Duckworth will officiate. The family will receive friends at Kimbrell-Stern on Monday from 5:30 PM till 7:00 PM. Bobby was born in Albany on October 26, 1939 and graduated from Albany High School. Throughout high school, he was the manager of the AHS football team. After graduation, he managed the scoreboard at Hugh Mills Stadium. Later, his son Joey joined him, and, together they worked a total of 58 years for all the football teams. This was one of Bobby’s real pleasures. Another of Bobby’s pleasures was his love of automobiles. This led to his life-long career in the industry. He grew up in the family automotive business on Pine Ave. Following high school he worked with Keenan Auto Parts and continued to work through each business transition from Keenan to CarQuest to Advance Auto Parts, ending with his retirement in 2019. Bobby was a collector of antique cars. Bobby grew up as a member of the First Baptist Church of Albany. In later years he joined Porterfield Memorial United Methodist Church. He enjoyed participating in Chi Sunday School class. Bobby was a servant of the Lord and giver of his time and love to everyone around him. He considered it a blessing to be able to help others. He truly loved his family and friends. Bobby was a member of the Exchange Club of Albany since 1984. He served on the board several times. He treasured his friends and participated in the various projects. Bobby was preceded in death by his parents, Arthur Johnson and Fannie Alice McDaniel Johnston, his sons, Walter Johnston and Joey Johnston, his brothers, James Johnston and Thomas Johnston. He is survived by his wife of 39 years, Betty Johnston; daughter, Susan Esco (Jim); sons: Bobby Kitchens, David Hall, and Jimmy Fowler; daughter in law, Stacey Johnston; granddaughter, Morgan Johnston; grandsons: David Lightle and Dylan Lightle; along with numerous other grandchildren and great-grandchildren. In lieu of flowers, donations may be made to St. Jude’s Children Hospital, the MS Society, or the charity of your choice. You may sign the online guest book at www.kimbrellstern.com.

Bobby Joe Johnston passed away unexpectedly at his home on Thursday, July 15, 2021. His funeral service will be held at 11 AM on Tuesday, July 20, 2021 at Kimbrell-Stern with, interment to follow at Crown Hill Cemetery. The Rev. Josh Duckworth... View Obituary & Service Information

The family of Bobby Joe Johnston created this Life Tributes page to make it easy to share your memories.

Bobby Joe Johnston passed away unexpectedly at his home on Thursday,...

Send flowers to the Johnston family.