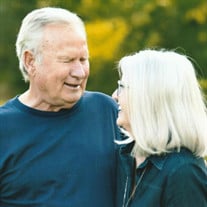 Bob O. Barbre, 75, of Albany, passed away Wednesday, April 27, 2022 at his residence surrounded by his family. The family will receive friends Friday, from 6 PM until 8 PM at Kimbrell-Stern. His funeral service will be held at 11 AM Saturday at Sherwood Baptist Church with the Rev. Patrick Sebesta officiating. Interment will follow at Crown Hill Cemetery with Military Honors. A native of Albany, he was the son of the late James Cromer Barbre and Sarah Fleming Barbre. He served in the U. S. Army and continued his service working at the Marine Corps Logistics Base where he worked as a Production Manager and retired after 33 years of service to our country. Bob was a member of the Armed Forces Government Employees Union where he was the MCLB representative and served as an officer for three years. He was a member of Sherwood Baptist Church and the Disciple Makers Sunday school class. In addition to his parents, Bob was preceded in death by his brothers: Jim Barbre, Ben Barbre, Bill Barbre, and Sam Barbre; and a sister, JoAnne Hutchinson. He is survived by his loving wife of 39 years, Teresa Barbre; his daughter, Barbara Ann Collins and his son-in-law, Will Collins and grandson, Maverick Charles Collins; a brother, Richard O. Barbre; four sisters: Margaret Barbre Jolly, Judy Barbre Wilson, Frankye Barbre LeMay, and Ginny Collins; two sisters-in-law: Cyndi Lewis Barbre and Melody Barbre; nieces and nephews: Jackye, Steve, Tanner and Nick Mitchum; and numerous nieces, nephews, and extended family. In lieu of flowers, those desiring may make memorial contributions to Meet the Need c/o Sherwood Baptist Church, 2201 Whispering Pines Rd., Albany, GA 31707.

Bob O. Barbre, 75, of Albany, passed away Wednesday, April 27, 2022 at his residence surrounded by his family. The family will receive friends Friday, from 6 PM until 8 PM at Kimbrell-Stern. His funeral service will be held at 11 AM Saturday... View Obituary & Service Information

The family of Bob O. Barbre created this Life Tributes page to make it easy to share your memories.

Send flowers to the Barbre family.