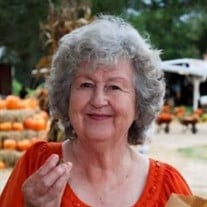 Bertha Young Morefield, 89, of Albany, GA, died Saturday, January 8, 2022. Her funeral service will be at 2 PM on Wednesday, January 12, 2022 at the graveside at Crown Hill Cemetery. The family will receive friends at Kimbrell-Stern on Tuesday,... View Obituary & Service Information

The family of Bertha Young Morefield created this Life Tributes page to make it easy to share your memories.

Send flowers to the Morefield family.