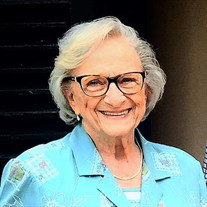 To know her was to love her. An infectious laugh, a witty humor, an attention to detail – these are just a few ways to describe our mother, Annette Halstead Urquhart. Annette was an astute, funny, caring, loving wife, mother, sister, aunt, grandmother and more. She left this world on September 14, 2021, at the age of 86. Born on September 4, 1935, and given the name of Shirley Annette Halstead, Annette was the youngest of seven children borne to Sidney Bryon Halstead (1878-1967) and Mattie Manning Halstead (1900-1995). Annette enjoyed the company of her three brothers (Sidney, Jack and Gene) and her three sisters (Meriam, Pauline, and Barbara). Not long after graduating from Albany High School in 1953, Annette met Ross James Urquhart, Jr., who was then a U.S. Air Force Airman stationed at Turner Air Force Base in Albany. They fell in love and got married on August 1, 1954, and over the course of 11 years added five children to their family. Ross and Annette traveled the globe, thanks to the U.S. Army. They lived in many places statewide including Texas, Oklahoma, Maryland, California, Missouri, Colorado, and Georgia – and spent three years living in Germany where Annette visited such places as Paris, France and Rome, Italy. Annette was a loving mother to her children, often parenting them alone while their father served our country in Vietnam, Korea, Japan, Europe and multiple assignments in the U.S. Upon returning to Georgia in the late 70s, Annette worked for Consolidated Loan Company, Albany, GA, for nearly 30 years. Annette was known for her quick wit, her infectious laugh, her smile, and her beautiful singing voice. Annette is pre-deceased by her husband, Ross James Urquhart, Jr. and her son, Ross James “Jay” Urquhart, III. Her memory will forever be treasured by her sisters, Pauline Halstead McEuen Kellam of Winter Park, FL, Barbara Halstead Hancock of Albany, GA, and her sister-in-law, Marie Grubbs Halstead of Albany, GA. Her children, Martin Urquhart (Severna Park, MD), Toni Mason (Joe, Athens, GA), Tara Urquhart (Athens, GA), and Shawn Urquhart (Erin McAllister, Sugar Hill, GA) surrounded their mother with love as she took her final breaths and left this world. She also leaves behind 10 grandchildren, 4 great grandchildren, and multiple nieces and nephews. Her family is forever grateful for the loving care she received by all the staff at St. Mary’s Highland Hills Memory Care and Christopher’s Bridge in Athens, Georgia. Visitation is Friday, September 17 at Kimbrell-Stern in Albany, Ga. A funeral service will be held Saturday, September 18 at 10:00, Kimbrell-Stern, followed by a graveside service in Leesburg, GA, where she will be laid to rest alongside her husband Ross and her son Jay. Bye for now, Mom, bye for now. You’re finally home.

To know her was to love her. An infectious laugh, a witty humor, an attention to detail &#8211; these are just a few ways to describe our mother, Annette Halstead Urquhart. Annette was an astute, funny, caring, loving wife, mother, sister, aunt,... View Obituary & Service Information

The family of Annette Halstead Urquhart created this Life Tributes page to make it easy to share your memories.

To know her was to love her. An infectious laugh, a witty humor,...

Send flowers to the Urquhart family.