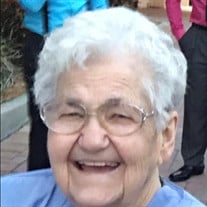 Angie N. (Trotter) Bailey, 86, went to be with Jesus on Thursday, August 8, 2019. Funeral services will be held on Wednesday, August 14th at 10am at Kimbrell-Stern Funeral Home, 1503 Dawson Road in Albany, GA; immediately followed by internment at Crown Hill Cemetery. She is survived by two sons: Pastor Bill Bailey (and Sally), and Mike Trotter (and Mona); five grandchildren: Caleb Bailey (Lauren), Chelsea King (Jamar), Caitlyn Bailey, Michael Trotter (Alison), and Matthew Trotter (Aubrie); six great grandchildren: Rowan King, Jeremiah King, Cade Bailey, Lauren Trotter, Collins Trotter, Blake Trotter; and one step-daughter: Diane Banks and her daughter, Tonyia Veloso. Angie was born on July 1, 1933 in Thompson, GA as the baby of the family. She was the last surviving sibling of 5 children. She married Lee Roy Trotter and had one child, Mike. Following her first husband’s death, she married William (Bill) Bailey in 1968. They were married for 27 years, and had one child, Bill Bailey (Jr.). Angie worked at the Gordon Hotel in downtown Albany, GA; Camelot Restaurant (Ramada Inn) in Asheville, NC; and had an in-home daycare in Bradenton, FL. It was common for her to take in family members who were in a difficult stage of life, and she served as an emergency shelter for Manatee Children’s Services when their main home was full. She loved Gospel Music and enjoyed attending her son’s concert promotions throughout the country. After retiring in Albany, GA, she moved back to Bradenton, FL in her late 70’s. Her church home was Happy Gospel Church, where she loved hearing her son sing and preach. She spent the last five years of her life on dialysis, three times per week. Special thanks to Caitlyn Bailey, Sally Bailey, and Valary Woods as her primary caregivers. In lieu of flowers, memorial gifts may be sent to http://www.happygospelchurch.com/give.

Angie N. (Trotter) Bailey, 86, went to be with Jesus on Thursday, August 8, 2019. Funeral services will be held on Wednesday, August 14th at 10am at Kimbrell-Stern Funeral Home, 1503 Dawson Road in Albany, GA; immediately followed by internment... View Obituary & Service Information

The family of Mrs. Angie N. (Trotter) Bailey created this Life Tributes page to make it easy to share your memories.

Send flowers to the Bailey family.