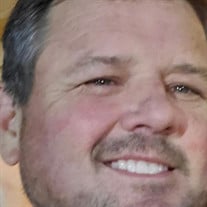 Dr. Alan D. Ford II, DMD, 47, of Albany died Saturday, October 12, 2019 in Panama City Beach, FL. The family will receive friends at Kimbrell-Stern on Saturday, October 19, 2019 from 11 AM-1 PM. A celebration of life will be held on Saturday, October 19, 2019 at River Pointe Country Club from 4 PM-6PM In 1990, Alan Ford, II graduated from Southland Academy in Americus, Georgia. He went on to graduate from Georgia Southwestern in 1995 with a degree of Bachelor of Science as well as membership in the Sigma Chi Fraternity. Thereafter, Alan graduated from The Medical College of Georgia in 1999 with a degree in Dentistry. In 2017, Alan built his dream dental office known as Mossy Oak Dental in Lee County, Georgia. In his spare time, Alan loved to golf, take the boat down the river, and do anything which involved his wife and kids Survivors include his wife, Kristen Olson Ford and their children, Abigail “Abby” Ford and Alan “Trece” Ford III all of Albany, his mother, Cheryl Ford, mother in law, Ronna Olson Conley and her husband, Jerry; 4 sisters in law, Kim Shirley, Chastity Matthews and her husband, Garett, Cari Kehren and her husband, Russell and Cortney Russell and her husband, Robert, and a brother in law, Larry Torres III and his wife, Mona. Alan was preceded in death by his father, Alan D. Ford, Sr.

The family of Dr. Alan D. Ford, II, DMD created this Life Tributes page to make it easy to share your memories.